Ellen DeGeneres sold the very same luxury home in Hollywood in 2007 for $10 million, then bought it back in 2014 for $8.75 million. Then again, sold it for $9.9 million to Barry Schwartz, co-founder of  Calvin Klein Inc.

Will it go round in circles? In the case of the home-flipping habits of Ellen DeGeneres, yes. DeGeneres made the market spin again with the sale of a Hollywood Hills West home that she’s now sold for a second time, the Los Angeles… Read more at Realtor.com

Ellen is now considered as one of Hollywood’s biggest celebrity home flippers, over the previous decade she already owned and sold seven luxury properties.

She had a $1.2 million tree house, a $12 million Malibu beach luxury estate and a luxurious mansion priced at $40 million that she flipped and already sold for a $15 million profit.

Ellen DeGeneres Flips Homes and Makes Millions: A History and a Hushed Sale

Ellen DeGeneres shines in the spotlight most notably as a talk show host who enjoys gifting her guests with swag featuring her face on it. But, most of her personal life remains low-profile. In an off-market deal, DeGeneres and her wife Portia just sold their Hollywood Hills home for $9.9 million… Read more at Forbes

Luxury Home for Sale on the Miracle Mile in Los Angeles

The Diditan Group is a premier residential home builder and developer with over 15 years of experience.

Find out what others are saying about us: https://www.youtube.com/watch?v=W3Bm0l256vM

The Miracle Mile district during the early 1960s

In the early 1920s, Wilshire Boulevard west of Western Avenue was an unpaved farm road, extending through dairy farms and bean fields. Developer A. W. Ross saw potential for the area and developed Wilshire as a commercial district to rival downtown Los Angeles.

Ross’s insight was that the form and scale of his Wilshire strip should attract and serve automobile traffic rather than pedestrian shoppers. He applied this design both to the street itself and to the buildings lining it. Ross gave Wilshire various “firsts,” including dedicated left-turn lanes and timed traffic lights, the first in the United States.

Ross ordered that all building facades along Wilshire be engineered so as to be best seen through a windshield. This meant larger, bolder, simpler signage and longer buildings in a larger scale. They also had to be oriented toward the boulevard and architectural ornamentation and massing must be perceptible at 30 MPH (50 km/h) instead of at walking speed.

These building forms were driven by practical requirements but contributed to the stylistic language of Art Deco and Streamline Moderne.

The 1939 Streamline Moderne May Company Building marks the western border of the Miracle Mile and “Museum Row”.

The moves also contributed to Los Angeles’s reputation as a city dominated by the car. A sculptural bust of Ross stands at 5800 Wilshire, with the inscription, “A. W. Ross, founder and developer of the Miracle Mile. Vision to see, wisdom to know, courage to do.”

As wealth and newcomers poured into the fast-growing city, Ross’s parcel became one of Los Angeles’s most desirable areas. Acclaimed as “America’s Champs-Élysées,”[1] this stretch of Wilshire near the La Brea Tar Pits was named “Miracle Mile” for its improbable rise to prominence. Although the preponderance of shopping malls and the development in the 1960s of financial and business districts in downtown and Century City lessened the Miracle Mile’s importance as a retail and business center, the area has retained its vitality thanks to the addition of several museums

An Art Deco style bank at 5209 Wilshire was built in 1929, and joined a select other Miracle Mile buildings when listed on the National Register of Historic Places. It was designed by the architecture firm of Morgan, Walls & Clements, which also designed the Wiltern Theatre, the El Capitan Theatre, and other notable buildings in Los Angeles.

Note: According to historian David Leighton, of the Arizona Daily Star newspaper the Miracle Mile in Tucson, Arizona derives its name from Los Angeles’ Miracle Mile.

Attribution goes to Wikipedia for the History of Miracle Mile 90048

Follow the Zillow link here: http://goo.gl/xakcNa to checkout more on luxury homes for sale in the Miracle Mile Los Angeles 90048.

The good news is, however, that on Saturday, August 13, Council member José Huizar and the City of Los Angeles’ Bureau of Engineering will be hosting Rock Day L.A., a free event at the former bridge site to commemorate the old structure and celebrate the soon-to-be-built new one to take its place.

Built in 1932, the bridge, with its towering arches and intricate lampposts, was famed for its Art Deco design and graced the silver screen in movies like Grease, Terminator 2, and Drive. It was as enduring a symbol of Downtown L.A. as the Hollywood Sign is for, well, Hollywood, and stretched across the Los Angeles River, connecting the ever-popular Arts District to Boyle Heights.

The bridge was inflicted by an irreversible alkali-silica reaction (aka concrete cancer) that might have caused it to collapse, particularly in earthquake-prone Los Angeles. Plans are already underway to build a new, decidedly more modern structure in its place.

As part of Rock Day L.A.’s festivities, officials will be handing out 1,000 pieces of the demolished bridge for sentimental visitors to take home. The pieces range from the size of a paperweight to a softball, and will each come with a Certificate of Authenticity from the city.

The event will also feature model renderings of the proposed $40-million-dollar project to create public park space under the new bridge, which will feature 20 lampposts salvaged from the old structure, as well as one of its infamous arches. Additionally, food trucks, live music, and a science booth showing samples of the alkali-silica reaction on concrete will be a part of the event.

The Bureau of Engineering will be examining the souvenir concrete remnants to be sure they’re safe before gifting them off. 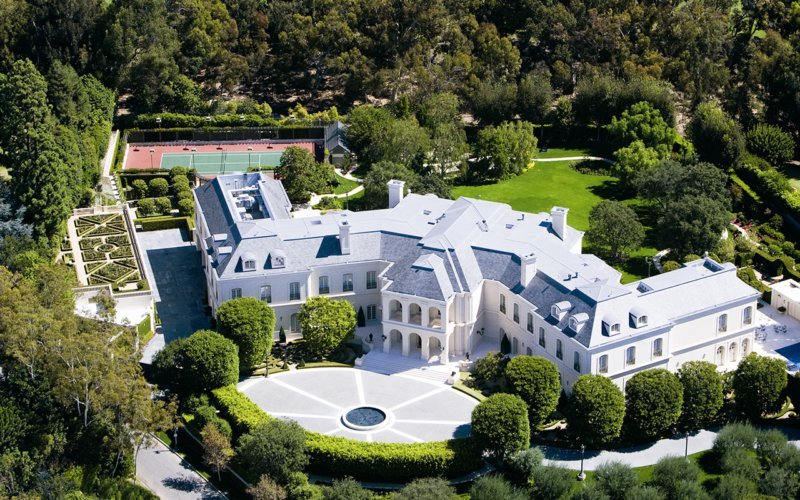 This luxury residence just became the most expensive home in America

Built in 1991 on five acres of land in the Holmby Hills section of Los Angeles, the house is a staggering 56,500 square feet and has 123 rooms, including seven bedrooms and a service wing. The listing refers to it as the largest residence in Los Angeles.

The mansion has a long pedigree, as it was previously owned by Candy Spelling, the widow of producer Aaron Spelling. Spelling listed the property for $150 million in 2008.

It was eventually sold to Petra Stunt, the daughter of Formula One racing billionaire Bernie Ecclestone, for $85 million in 2011. Stunt tried to offload the property for $150 million in 2014, but a report says she declined a matching figure in 2015.

Original Article can be found here

While most people associate the Playboy Mansion with scantily clad playmates and sex-fueled debauchery, it served as the childhood home for Hugh Hefner’s sons.

Now 23, Hefner’s youngest son, Cooper, recounts his childhood spent in what many consider to be a sort of adult fantasyland. For Cooper, it was quite the opposite: a child’s wonderland fueled by Indiana Jones-inspired adventures in the Grotto, a zoo full of exotic animals, and epic games of hide-and-seek played in the mansion’s private forest of redwood trees.

Our Los Angeles: Globally-Minded Vodka With An L.A. Twist

A new vodka micro-distillery recently opened in Downtown Los Angeles, and it churns out one of the most L.A.-style spirits we’ve tasted yet. The distillery, aptly named Our/Los Angeles, is part of Pernod Ricard’s Our/Vodka, a global brand with distilleries in six different cities around the world.

The idea behind the operation is to combine the know-how of Ricard’s notorious Absolut brand with the craftsmanship of small, local distillers. Each outpost is run by a team of local entrepreneurs responsible for developing the unique personality of the vodka in their city. In L.A.’s case, Steven Ocheltree and Tyler Simmons, co-founders of the creative agency, Sew, are at the helm. Each distillery follows the same basic recipe, but sources its ingredients as close to home as possible, resulting in a distinct flavor profile that is every bit the city’s own. Since metropolitan cities aren’t typically big corn or grain producers, the major variance from place to place is the water, which, according to many vodka connoisseurs, is the most important ingredient of all.

Our/Los Angeles’ sleek, modern tasting room in the ever-popular Arts District echoes the brand’s motto, “keep it simple,” which is applied to everything from the small, crown-capped bottles designed to encourage sharing amongst friends in a single sitting, to their mood-enhancing contents.

Our/Los Angeles is located at 915 South Santa Fe Avenue in Downtown Los Angeles. Tastings and tours are offered Monday through Friday from 1pm-5pm, and by appointment.

The post Our/Los Angeles: Globally-Minded Vodka With An L.A. Twist appeared first on The Agency.